Data Forms are the main input mechanism to collect end user budgets and forecasts. Data forms are a web based grid and its connected to Essbase database. So here essbase is a central repository of budget, forecast and actual data.
When user or planner logged into data form the data is fetched or saved back to the essbase database. These data forms are used by hyperion planners to fill the data and update the data and data forms can be accessed over the web by using the browser.

Data Form Structure:
Page: Its represent of drop-down list. Each drop-down represent a list of selected members from a dimension. This page enables us to select relevant members.
Rows & Columns: In planning data forms rows and columns will be there. So it's recommended to make a data form with account dimension as a rows and period, year as a columns.
POV: POV stands for Point Of View. pov has the static member selection of Dimension members.
Data Form Properties:
- Properties
- Layout
- Other options
- Business rules
Above properties are called data forms properties and two types of data forms will be there. One is simple data form and another one is composite data form by default simple data form has been enabled. And coming to composite data form  when ever user want to see multiple data forms in a single display need to use composite data form. 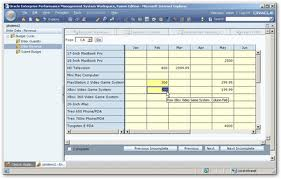 Account Dimension
This is standard dimension in hyperion planning application. In this dimension all the measures such as profit, loss, expenses, IT expense, rent expense, HR expense and so on form the Account dimension members.
The Account dimension specifies the data to be collected from budget planners. Can establish accounts for all budgeted items to the necessary level of detail.

Period and Year Dimensions
These two are also standard dimensions and these both represent time. Specify a time period and year for each value. Base time periods, such as months, are automatically rolled up to summary time periods, such as quarters and total year and has information of different calendar distribution of weeks like a 445, 454, 454, or even.

As administrators, specify base time periods and distribution of weeks in the Period dimension when creates application views. Use the year dimension to add years to the calendar. Year dimension members can not be renamed once they are created.

Scenario Dimension
Scenario dimension represent the broadest categories of data planning  application and it's  describes the type of data that a plan includes, such as budget, actual, or forecast, as well as the time span that the plan covers.

Bottom up facilitates bottom up budgeting/forecasting and target version facilitates top down budgeting. Version allows for flexibility and iterative planning cycles. For example, your application could have two versions, Working and Final, for each scenario.

Also can use versions to model possible outcomes based on different assumptions about interest rates, growth rates, and so on. For iterative planning, version dimension is the key.

Entity Dimension
This is key dimension that defines business organization hierarchy, workflow, and Entity responsibilities in an organization.

Entity dimension shows the flow of Planning information through organization. Can establish an entity for each group or responsibility centre that submits a budget plan. This dimension typically includes geographic regions, departments, or divisions, depending on your requirements.


In oracle essbase data storage properties will be defined where and when consolidations are stored. For example members are tagged as store data then Essbase sums the values of store data members and stores the result at parent level. 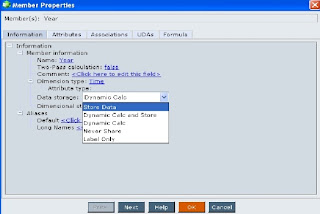 Total we have six storage properties in Essbase:


Store data property is a default storage property, when we load the data in to essbase will store values in the cell. Store the data values with member.


The shared member storage property provides a way to reuse data that essbase has indexed or calculated. Shared members, instead of storing data in multiplies places, create a pointer to a stored member. The data value associated with shared member comes from different member having the same name. Shared member is also called alternative hierarchy.


The data associated with the member is duplicated with the parent and its child if an implied shared relationship exists.


Label only used for all grouping pupose or navigating purpose and we would not tag a 'level 0' as lable only. Although a label only member has no data associated with it, it can display a value.
The label only tag groups members and eases navigation and reporting. Typically, label only members are not calculated.
Posted by Unknown at 06:47